The NYCDOE is under a lot of pressure over budget cuts this week! Facing that pressure, they have "released" some funds that they are required to do under Federal Law. This is (no doubt) because they want to look like they are playing nice and "working" with their 'partners' in schools.

Don't forget, they are awaiting a final court decision regarding the budget cuts they intend to inflict on schools. That decision will be rendered on Thursday, August 4th. As that is happening, the DOE is also locked in closed door negotiations with the City Council over whether (and how much) of the school budgets will be restored. Those negotiations are ongoing but I have heard nothing about them.

And, through all of that,  they are facing an unexpectedly motivated pushback from community members and stakeholders, many of whom who are organizing a rally on Thursday in front of the courthouse in hopes of restoring their cuts to students.

That is a lot of pressure! So it would make sense that the DOE would at least make it look like they are giving ground on some issues.

So, last night, the NYCDOE's 1st Deputy Chancellor sent an email out to principals claiming to have "released" crucial funds to help schools. He identified the amount funds being released as $100 Million.

Does that sound like a lot? I think the 1st Deputy would like you to believe it is. Use some basic math, however, and you may see that it isn't.

$62,500 will pay for exactly one experienced paraprofessional.

And that is on average. These funds aren't being distributed to all schools. Only certain schools, with a certain population of student, will receive a portion of these funds.

They took four teachers and one guidance counselor from my school. It looks like they are giving back a few subs and some school aides.

The DC's email from last night is below ... 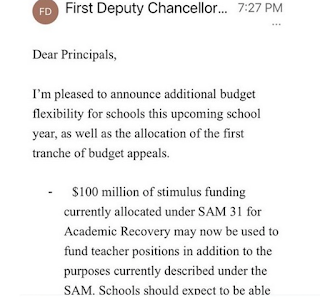 A follow up email sent to schools from another official is here ...

"Good morning All
Yesterday at 7:27 pm  you received an email from the first Deputy Chancellor Dan Weisberg about the 2022-2023 budget updates.
What does this mean:
The Academic Recovery money( Sam 31)  you received in June can now be used on teacher positions."

(yes. It takes two Tweed officials to send an email. No bloat there, right!?)

And a follow up "School Allocation Memo" was shared with principals as well. I am sharing only that portion that provides details as to where the money will be going:

With a goal to maximize equity, the methodology is designed to target schools that serve high proportions of students in foster care, students in shelter, students in temporary housing (STH), students who are English Language Learners (ELL), newcomer and long-term ELLs, students with interrupted/inconsistent formal education (SIFE), students with disabilities (SWD), and students with economic need (ENI).

Due to the different types of programs in District 79, and their distinct structures and needs, the Superintendent modified the allocation methodology for their programs to account for the characteristics of their students, such as incarcerated youth and programs with large numbers of over-age under-credited pupils. These changes will also enable funding to be distributed in a way that helps address breakage due their programs being multi-sited.

The $125M is then allocated evenly per weighted capita; however, schools will receive a minimum of $25,000 and no school will receive more than $200,000. The allocation methodology only applies to K-12 students and is the same for all schools. Twenty percent of the funding ($25M) is allocated for arts and enrichment programming as described below.

Funding for District 79 Alternative Schools and Programs is indicated on the allocation tables.

Posted by NYCDOEnuts at 11:42 AM
Email ThisBlogThis!Share to TwitterShare to FacebookShare to Pinterest