I've said it before and I'll say it again. Some things just happen to have a particular way of happening in June. I thought I'd post some updates here to help you get through some of the June nonsense: 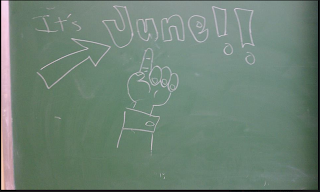 *First of all, let's make one thing clear: -If you feel yourself angry at people who you once found mildly annoying, then it's because it's June and you're going crazy. Don't go crazy. Take a deep breath, read this blog and relish in the perspective you may gleen.

*-If an administrator says 'this isn't happening just at our school you know, it's happening all over the system', then trust in the fact that it is happening just at your school.
-If an administrator says 'we need to help out NX kids' -and they hadn't helped an NX kid all damn year, then trust you better find a way to make those numbers work! (but, if you have tenure, feel free to make the admins wait until June 20th or so 😂😂😂).
-If it's June and a programmer or administrator is being vague about your schedule or program for next year then you're about to be screwed.
-If a guidance counselor suddenly and without warning needs to see you then you're about to be asked to pass that one kid who has no absolutely no business passing your class. Be prepared. Don't click that zoom link. Don't reply to that email.
-If an admin is promising you the sun and the moon and the stars for next year then you should assume that they have been a given a budget for the sun and moon and the stars and the sky. That P is holding out on you. Keep pushing.
-If it seems like the entire staff has suddenly gone crazy in the middle of the day, it's probably because the entire staff has gone crazy in the middle of the day.
-If it's June and a teacher does not seem stressed, then that person has a medical marijuana card -and is using it with frequency. Don't be like that teacher. Be stressed instead.
*-If students -whom you've never seen before- suddenly start showing up to that 9th period Music Appreciation class you're teaching, then  it's probably because they want a mercy grade (I know. You knew that. Just don't forget it. No, the kid does not care about your wardrobe or how your grandparents have been. They *just* want a 65 after having not come to class. Prepare that makeup assignment).
*-If you feel like you're being pressured to change grades, then you're being pressured to change grades. It's not that complicated.
*-If someone walks the building mumbling about how teachers are the problem, then they're probably A) The problem B) have been part of the problem the whole while in ways you'll never know and C) are about to cause a problem.
-If you're feeling overly stressed but don't want to take the day off then use your late time! Every year, most city teachers are given 3 hours and 25 minutes of late time.  That's free time that you get! You can't roll it over and you can't bank it. It goes away at the end of the year. So, if you have any left and you're feeling stressed, just go to Starbucks and go catch up on your snaps or something. The kids can wait. Your AP can absolutely wait. That guy who's substituting your class while you're having coffee? Okay. He's a nice person but, dammit, so are you! Take your 3 hours and 25 minutes.
-If that nice, quiet kid suddenly comes to your zoom link asking to sit in in with your class during lunch period then let them. Teachers aren't the ones June is harsh on.
Posted by NYCDOEnuts at 5:15 PM No comments:
Email ThisBlogThis!Share to TwitterShare to FacebookShare to Pinterest

Mitch McConnell Walks Into a Union Hall ... and approves

Mitch McConnell, confident in his chinless repose, shocked the world tonight as he strode to the podium of UFT headquarters' Shanker Hall during their weekly Executive Board meeting.  After several uncomfortable moments of deafening silence from the 100 member UFT governing body,  McConnell proceeded to give a fiery speech which included a ringing endorsement of the UFT's new rules for remote Delegate Assembly next year.

"I am just so impressed with each of you", said the Senator, likening the proposed UFT rules with his strong support for the anti-voting rights acts that have been sweeping across America's Republican states.

McConnell went on to tell the group in his famously no nonsense and direct tone,  "Deep down, you know that these voting rights laws afford at least the most basic voting privileges to people as long as they can show up to the polling place with "proper" ID", before angrily pointing his little pinky finger and adding "... and your new rules for UFT delegates accomplish the same general thing". "Great job everybody!! Only people who are "'really dedicated' should have real voice!".

At the end of his speech, the Republican Minority Leader -responsible for the Trump Supreme Court appointees and for helping to sweep the capitol building insurrection under the rug- received a thundering standing ovation from crowd.  "Thanks Mike" one member screamed during the ovation, referring to UFT president Michael Mulgrew. "I really didn't give a crap about this whole democracy thing anyway and you all seem like you know what you're doing pretty well so, sure, yes. I vote yes!!!!"

States from Georgia to Texas have adopted laws making it more difficult, according to some Democrats, to vote. And McConnell, looking for support, knew just where to go.

This is because, during this same time, the UFT is planning a similar rule change for their own Delegate Assembly -one that would deny all rights (sans listening and voting) to elected UFT delegates who are otherwise compelled to phone or zoom in.

Privately, some members have expressed concerns over establishing a two-tiered system of rights for delegates.  But McConnell defended the move, growling in a tough-guy scratchy voice, "This isn't a two-tier system at all! You are setting up an extra chance for some of these members. I mean, think about it, if they couldn't afford to be there for me, or if they had a kid at home or some such damn thing, then, I mean,  I would just say 'screw 'em' and move on. What you libs are doing here gives them a chance to listen -to you". Pausing to check a text on his cell phone, the senator quickly added "AND ALSO they can press 1 to vote yes -on your stuff".

Toward the of the ovation, McConnell was heard screaming  "This is such a great job everybody! I am so damn proud of you" over the noise and was also heard adding "Welcome, my friends, to the Dark Side", before the ovation roared on like a rock concert in the '80s.

Screaming through the cheering crowd one final time, McConnell concluded "If those other delegates want to participate in some debate that you libtards like to have or submit a resolutions or some such, let them get their butts down the UFT headquarters and do it them damn selves".

Other UFT members had hoped for an expansion of opportunities for full participation in the Delegate Assembly. Those educators dialed in tonight only to discover the exact opposite had happened: Beginning next year, no one who is unable to travel all the way into downtown Manhattan will be able to submit a resolution for consideration or to debate anyone else's resolution at all. As of 2021-2022, all those folks will be able to do is listen in as other delegates perform the actual legislating needed to govern the UFT and then to vote at the end.

"We got this guys. Just drive home" added one high ranking union official from the stage. "Just go".

"We just got through a damn pandemic" one unmuted member on the call was heard saying, "they did all of these things perfectly well for the last 18 months. What the hell is wrong with them? They are really going to stop attracting participation? Getoutta here. Have they heard of Janus?".

"But those delegates would be able to press a button to vote on the work of the other delegates who are present" replied one high ranking union official -in a very kind tone. "We want them to vote. We want them to have at least that basic right."

"Should I register as a Republican now?", wondered another confused member after casting her vote. A colleague nearby just shrugged her shoulders in response and offered, "I guess, just wait for the email?".

"This is incredible" said another upset member, "I have to watch them take away voting rights for people on TV and now my own union wants to make sure that duly elected delegates are second class representatives in their own Delegate Assembly. I can't believe these two people are working together"

Chuckling under his breath at that last statement was none other than Senator McConnell himself. "Oh, he has no idea", murmured those Senatorial fish lips. The world famous politician, otherwise occupied by the complimentary banana and cantelope station located in the back of the hall, eventually turned his shoulders and laughingly asked "Hey, did you want us to mail them some damn free fruit too?"

The vote passed with 94% approval. Just six (out of 100) members voted against. Final authorization of the rule change is set to take place on Wednesday's Delegate Assembly.  "Don't forget to get this done before anybody has a chance to figure out just what tf is going on, okay??", yelled the minority leader to Mulgrew as he left the union hall, fist raised in solidarity. (President Mulgrew was seen nervously looking left and right before briefly raising his fist in reply and quickly adjourned the meeting).