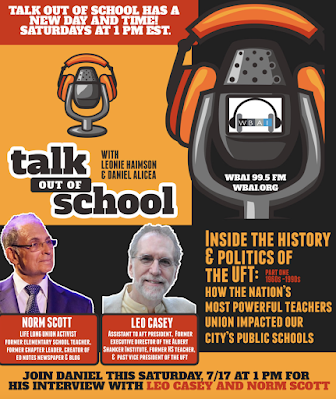 Posted by NYCDOEnuts at 11:59 PM 2 comments:
Email ThisBlogThis!Share to TwitterShare to FacebookShare to Pinterest

Next year's challenges come from the extreme right, the extreme left AND the extreme center.  It's time. BYO common sense.  Email normsco@gmail.com for the Zoom Link

1. State of the Schools updates
Going back to school in the fall: Will it be safe? Note stories emerging of children who are not vaccinated facing serious uptix.
Principals attack staff - Chapter leaders invited. UFT members under attack- how is the union helping - what else do we need them to do, how can we help. Chapter leaders of some schools will be invited, including some newly elected CLs and Delegates who James assisted in their campaigns.
2. UFT elections 2022 -
Can a coalition of caucuses and independents be built to challenge Unity?
What role can ICEUFT play in bringing people together?
The new delegate assembly - forging a cooperative force.
3. Brief update on Retiree Advocate work in fighting the attacks on our healthcare. We've organized a webinar with over 300 attendees, a press conf with 150 and a rally and march with almost 400 last week and led by Gloria's work have built alliances with other city unions. The struggle continues as the MLC will vote today. And note that in-service people will be next on the agenda.
More from Norm ....
Note that RA is mostly a coalition of people from New Action and ICE and a few former MOREs who are now on this listserve. Bennett Fischer and Prudence Hill have been essential to the effort.
Email me with suggestions for other items if there will be time -- we will keep the meeting to two hours since we are not going to be eating -- though I may order in some rice pudding.
We need to get an idea of how many might be coming so email normsco@gmail.com if you can attend. If you can't attend we will be doing more meetings -- maybe even at the diner.
ICE News and updates
Happy summer everyone - from one who is entering the 20th year of continuous summer since I retired in 2002.
We haven't met in a long time but the ICE/UFT Google listserve has been active. Our broad based ICE group listserve was disappeared in December when Yahoo groups were eliminated. So we have merged members into our smaller Google group which had functioned as an internal private group
... as one of the two founding caucuses of MORE Caucus we unlike TJC  continued to stay in touch, especially after a faction in MORE asked us to leave. WIth no formal rules we are a loose confederation of individuals with an interest in a democratic union (and caucus) and mostly have worked under consensus since we began in late 2003. With no formal membership, just showing up gives you a role to play. In addition to RA, in this listserve we have people who are in Solidarity and MORE Caucus and even someone we trust who is in formally in Unity,  This informal grouping of people is a way forward in building coalitions in the UFT where common interests coincide.
ICE founder John Lawhead, now also working with Solidarity Caucus, has been running a fabulous UFT history study group. If we want to understand the UFT read Dave Selden's book - John puts up links and I post his announcements on this list. This week we are reading the late great and honorary ICEer from Chicago - and one of the founders of CORE which actually tossed out a Unity like leadership - George Schmidt's pamphlet on the AFT and the CIA ---

George N. Schmidt, The American Federation of Teachers and the CIA (1978, reprinted 1990)

Hmmm -- did Randi send people to Haiti? Register here: https://uftrg.org/.
Sadly, David Dobosz, one of our leading voices, passed away a year and a half ago after a long illness. Dave and Pat invited Vera, Gloria, Lisa and I over for lunch a few months before he passed and he made us a fabulous authentic Polish meal. His voice will be sorely missed but Pat continues to work with us.
The ICE blog under James Eterno has been flourishing and is must reading for many teachers and UFT officials. Note the number of comments when James posts, which have become must reading for those who want to be informed about the UFT. http://iceuftblog.blogspot.com/
Other blogs associated with ICE are the http://nycdoenuts.blogspot.com/ and my own https://ednotesonline.blogspot.com/.
I would also recommend you check out Jonathan Halabi's blog - https://jd2718.org/ and
a blog by Erik Mears who we met in MORE - https://provocationsblog.blogspot.com/
And of course I always check out Arthur, the dean of long-time bloggers who inspired many of us to start blogging in the first place - http://nyceducator.com/
A special welcome to this listserve for Vincent Wosjsnis, retired chapter leader who now resides in Ghana but is in town for a few months and attended the rally last week. We relived some great stories from the time when Angel Gonzalez cold-called him and Vincent invited him to his school, which really pissed off the Unity people who had been courting Vincent.
Also welcome to Sheila Zuckowsky who has been associated with ICE/UFT in the past. Shelia has also become active in the Retiree Advocate.
Also joining the listserve recently are working teachers Emma Pelosi who just became a delegate and Daniel Alicea who is a delegate and has become very active in the union with the influential Educators of NYC.
Congrats to one of ICE founder's Sean Ahern who retired July 1 - we had a great time hanging out with Sean, Al Zucker and others after the rally. We also saw ICE stalwart and former CL Julie Woodward at the rally. Sean, Julie and Ellen were instrumental in writing the awesome 2010 almost 30 page ICE platform for that election. If you want to see a comprehensive doc on reforming our union check it out:

Part II: What we confront in public education

Part III: Strategy and tactics for a good contract

Part IX: Our union and government priorities
Hope to see you on the Zoom on July 22 at noon.
Norm
Posted by NYCDOEnuts at 11:10 AM No comments:
Email ThisBlogThis!Share to TwitterShare to FacebookShare to Pinterest
Newer Posts Older Posts Home
Subscribe to: Posts (Atom)