This one is about how to stay current with teaching practices.

Any teacher working under the Danielson rubric knows well the challenges of hitting those points on Danielson 3D. Apparently, if we're not "assessing throughout the entire lesson", we're just not good, real teachers.

I'm a high school social studies teacher. For us, it's almost all content and skills during the class. For years, I have received the worst advice imaginable from admins about how to approach this assessment issue.  I mean, I can understand it through the lens of a math teacher or a phys-ed teacher, but through a history teacher? History classes don't work this way. So it has always been understood that fulfilling this Danielson 3D requirement will require the breaking of the integrity of how a social studies class runs and functions.

And this is where the "Stop, Jot & Share" has really saved me!

Most of my lessons are workshop model in nature. Everyone has their own way and approach to creating a good lesson. Although I employ a variety of ways to use my time with students, the Workshop Model is my personal go-to (what's yours?). Typically, my mini-lesson lasts for 12 or so minutes and I use that time to introduce  the concept or topic for the day.  So, each day, at the end of my mini lesson, I use this technique. I throw up a quick questions assessing whether they were paying attention and understood what I went over in the mini-lesson and I A) Stop the lesson B) askt hem to write an answer in one sentence, then make them C) share that answer with people around them (for me, this means people in their group). When there is an AP in the room, I'll grab a clipboard or something and look like I'm keeping a detailed record (I'm not. I just look that way), but most times, I'm just eaves dropping on the kid who I wasn't quite sure about (you know, that one who was talking or sleeping or just staring out into space during the mini-lesson). Just enough to make sure they get it. If they don't, I'll intervene. If they do (and they usually do. This isn't high stakes. It's school), I'll grab my coffee and enjoy my little 3-5 minute break. 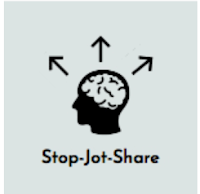 Best of all? It's got one of those wonderful, best selling little reformy names on it to make it look like something the reformy P may actually like. You can just hear it roll off your tongue, can't you? Stop Jot Share.

It's actually a pretty effective technique you can use in any part of your lesson. You can read more about it here.


Posted by NYCDOEnuts at 9:00 PM No comments: Links to this post
Email ThisBlogThis!Share to TwitterShare to FacebookShare to Pinterest

A few years ago, a friend got sick and tired of the commute into her Brooklyn school from Long Island. She found work as a teacher in one of the districts out here and has been there ever since.

You would think that she makes more money out in this fancy Long Island school district. But when I  once teased her about it, she was quick to correct me. Her NYC job was paying $89,000 at the time she had left. Her new district would honor only some of her time. She started at around $62,000.

To her surprise, the $62,000 wasn't the only hit she took. She now pays 6.5% of each check toward her healthcare. Her plan, as she describes is, isn't quite as good as GHI but is ok for her and her daughter. At the time of her interview, she was told that she would pay 6.5% of the healthcare cost. But my friend is very meticulous and she examined each of her first six paychecks from this district. and she learned that she was actually paying 6.5% of every paycheck. This brought her annual salary down toward $57,000 after healthcare (whereas she had been earning $89,000).

It is still a good trade for her. Some folks just can't take the commute from the burbs and the idea of living and working out there, as a teacher, was too good to pass up.

I had a conversation with another friend -a 32 year veteran teacher in one of the higher paying suburban districts out on the Long Island. His pay is $137,000 before his coaching salary. He also pays 6.5% of his overall salary for his healthcare. This brings his pay down to $135,000 (healthcare comes off of his base salary, not his differential). He makes more if his teams goes to the playoffs.

(many suburban school districts do not offer "per session". Instead, their BoE approves a position for jobs like a coach in their budget and allocates a differential to pay the entire position.  His salary is $144,000 with his differential.

You hear, virtually all the time, how suburban districts pay more money than NYC districts. But do they, really? In many instances, city teachers actually make more than teachers in the suburbs. We also work less than suburban teachers do and, in many cases, our school buildings are much more modern.

That old trope from our parents' generation of Ronald Reagan and Huey Lewis is just not accurate.  If you take a careful look at the overall and pay, and carefully define the term "compensation", then compare the city to the suburban districts, the facts may actually surprise you.

(Disclaimer: Everyone likes to point to "the rich" districts, as though that is the only type of district in the Suburbs. That's just not true. For this post, I'm working off of direct knowledge of two middle of the road districts from my county, Suffolk. But, once you disregard the wildly overpriced rich districts, this is the accurate picture).

But when you factor in the 6.5% he pays in healthcare, his actual salary is just 128,000. That's how much his healthcare affects his pay. The difference between he and a top earning teacher in NYCDoE district is now just $7,000.

We have to take a look at how our benefits affect our pay as well. If you use any of the Emblem plans, you pay just a small copay with every visit. Nothing is deducted from our paycheck. The City of New York pays 100% our monthly contributions for us. This is another part of our deferred compensation. We are not paid the money in cash each week, but we enjoy the benefit as part of our compensation package. When I was a kid, folks used to call these fringe benefits -benefits that come along with the job but aren't pat of the actual salary.  There is a way to determine how much our deferred compensation for medical care really is. The amount comes each year  along with our W2. Another statement, one that indicates how much was paid on our behalf through the UFT Welfare fund, comes in the mail. For me, this total amount was $35,000 last year. That is a whopping sum of money. This is what the City of New York reported to the IRS so it is as accurate a number as we are ever going to have.


It gets better during retirement. Retirees in many districts must continue paying into their healthcare systems. Not so in our case. One of the best factors of choosing to teach in New York City is that, once we're vested, our medical coverage is provided.

Now when we retire, my friend and I will still not make the same percentage of our salary. In both cases, our Tier IV pensions will be 60% of the average of our three highest earning years after 30 years of service, For him, this amount will be higher. If his team does not make the playoffs, and he receives no other raises, his 60% will be based off of his pay and differential; a total of $141,000. That's $84,000 per year. Not too bad! A top NYC teacher would expect to receive just $73,000 per year. That's an $11,000 difference (no other penalties or beneficiaries are being addressed here. Let's just assume we both take the most amount of pension).

Yet teachers in the city of two other sources of retirement that teachers in the suburbs do not. The first is the Annuity Savings Accumulation Fund, or ASAF. If you haven't heard about this annuity, then head over to Chaz' School Daze (who writes extensively about our retirement benefits) and read up on it. It's a small annuity the city pays into on our behalf:

The ASAF is created for each teacher that has completed step 8b of the salary scale.  Every year the DOE gives $400 to the teacher's ASAF and the City chips in by crediting the total account balance with an annual interest rate of 5%.


At this point, we have to talk about the difference in annuities. Our annuity (TDA or 403B savings account) is money that we save and is paid to us in addition to our pension. We pay taxes on this money only when we withdraw at retirement. All districts, including the city, offer an annuity. But our annuity is run by actuaries who work for the fund and the suburban district annuities are run by for-profit banks. The result? I benefit from an amazing 7% compounded interest contribution year annually (deposited every month). When retirement happens, a city teacher can ("and should") withdraw only the interest of his or her annuity. Every other district in the state of New York is not eligible for this and, in most cases, withdraw their actual balance to help compensate. My retirement package will be closer -a lot closer- to that magic 100% amount.


So when you factor super low cost medical coverage, and two annuities (each of which pays more than the suburbs) you see that the $11,000 extra my buddy makes isn't exactly worth it.


You can debate me if you want. But the pay is close. The buildings are new. The retirement outlook is better. It's clear to me we make more money that a typical teacher in the suburbs.