If/Then: The Real Meaning Behind June Nonsense in High Schools 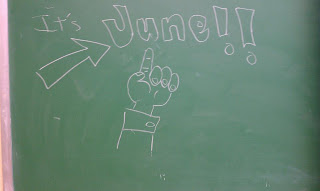 They don't happen in my current school, but these things happen often -and they have a particular way of happening in June. I thought I'd post them now to help you gain some perspective on the June nonsense.

-If your principal says 'Our budget for next year is horrible' then next year's budget is just fine.


-If a guidance counselor suddenly remembers your name, then (s)he probably just wants you to reverse a student grade

-If the main office suddenly and surprisingly makes a big deal about your latenesses, or grades (or call logs, or attendance, or anything else that actually doesn't matter all too much at this point in the year), then they're probably just looking to get you to agree to a crappy program for next year, or to a grade change (or some other equally crummy thing that clearly goes against your rights as a union member).

-If an AP (or P) suddenly treats you like you're an idiot, then there's a fairly good chance that the person is a moron -and was a moron the whole while (this is true the whole year, but more more evident in June).

-If your chapter leader says 'Look, I did the best I could do', what (s)he really saying is 'Look. You got screwed. Please just let me finish my TunaFish sandwhich in peace'.

-If an otherwise sane  friend or colleague suddenly becomes mean and cruel, or gets very cranky, it's probably because someone in the main office made a sudden and surprisingly big deal about their lateness or attendance or ... ok you get the point.

-If students -whom you've never seen before- suddenly start showing up to that 9th period Music Appreciation class you're teaching, it's probably because they want a mercy grade (I know. You knew that. But did you also know there's a VERY good chance that the guidance counselor sent them there with specific instructions that sound something like 'you go to the class I'll talk to Mr. X about giving you another chance.'? Ha!)

-If someone walks the building mumbling about how teachers are the problem, then they're probably A) The problem B) have been part of the problem the whole while in ways you'll never know and C) are about to cause a problem.

(This is totally unrelated, BUT) Check your minutes (you get 3 hours and 25(ish)  minutes to be late each year). If possible, BE LATE at least once during Regents Week. You owe yourslef that extra cup of coffee in the morning :D

Anything I missed?
Posted by NYCDOEnuts at 7:05 PM 1 comment:
Email ThisBlogThis!Share to TwitterShare to FacebookShare to Pinterest

I live just south of a military air museum and just north of Jones Beach, where there's a popular airshow each Memorial day weekend. Each year the World War 2 bombers fly over the house from the museum to the airshow. This year, my four year old asks what that loud, cool looking plane is.

"It's a bomber" I say.
"What's a bomber?"
"Well, it's a big plane that, um .. drops bombs".
She gets a little scared. "You mean it's going to drop a bomb on us?"
"No sweetie. They only drop bombs on other people in far away places".
"Why do they drop bombs on people?"

This was the very first question my daughter asked that I just can't answer.

I guess I'll have to take her to an America Legion parade today for her to see it. Those parades aren't as popular as the airhsows, but they have a bit more value, given the purpose of the holiday.
Posted by NYCDOEnuts at 8:32 AM No comments:
Email ThisBlogThis!Share to TwitterShare to FacebookShare to Pinterest

Will NYC Teachers Get to Vote On The New Evaluation System??

Just to make one thing clear: The Teachers' Contract and the law that's called APPR (about new evaluations for teachers & principals) are two things that are way too complicated for me to understand.

In fact, they're both way too complicated for most regular teachers to understand! And since neither the mayor or the union have been clear with the employees (or members) over this, most of us actually don't know: Will teachers get to vote on the new evaluation system whenever it's agreed upon?

But will the new eval system come along with a new contract? I always thought the answer to that was no.

But then I read that the mayor dropped a real surprise announcement during his budget revision speech last week: He isn't offering back pay to union contracts. When I read this, my first reaction was 'now where did that come from?' I mean, I know it's a budget speech and budgets and payroll are (very much) related, but this guy was forecasting here -he was talking about future fiscal years and even future mayors! That was way off topic for a budget speech. Having followed this mayor in the news for so long, I'm left thinking that he was sending a pretty clear signal to at least one of the unions.

If you listen to him carefully enough, the mayor actually has a pretty big mouth. Stay with me here for a second, ok?

Because during that same speech (about the budget) the mayor also made it a point to talk about finalizing  the evaluation agreement for NYC teachers and principals.


"There's no substantive reason why a final agreement should not be reached very quickly," said the mayor. "The longer the U.F.T. waits, however, the longer it will take our schools to get the money they need and that they deserve."

Again, there is potential money on the line if the issue is resolved. So, on the one hand, it makes sense that he'd address it -as well as anything else having to do with money. BUT from where I'm sitting, it has looked more like the city  has been dragging their feet over finalizing teacher evaluations (don't forget, Chancellow Walcott was in Albany asking lawmakers for it to be scrapped back in late January) and the union (who actually seems very hot for this system -having sent out their big dog, Leo Casey a number of times to defend it) have been the ones wanting to get the issue resolved and put to bed. So this statement from the mayor actually looks more like a change of course in what I had seen the city doing in the past.

And why would the mayor change course? Because he needs that 4% ed increase from Albany, of course!! It looks like this guy is ready to get the eval thing done too.

Still with me? Because here's what I see: I see a statement that reflects a change in negotiating position (over settling the teacher evaluation thing), and I see another (seemingly bizarre) statement that stakes out the city's position on one of the issues of  contract negotiations (for all unions, but for teachers as well).

That makes me suspicious and I'm wondering, Is this evaluation related to a new contract?


Did you know that other districts throghout the state have settled on their contracts recently (after the APPR agreement in Albany)? And, of course, the members got to vote on the new setup for evals as they were voting on their contracts.

Oh yes, they did.

Anyway, I'm starting to think that they may have to let us vote on the new evals as those new evals will alter the contract enough for it to be re-written (and voted on).

Of course, not many people who this law effects will actually know -unless they announce a contract (or an eval deal without one).
Posted by NYCDOEnuts at 6:39 PM 2 comments:
Email ThisBlogThis!Share to TwitterShare to FacebookShare to Pinterest
Newer Posts Home
Subscribe to: Posts (Atom)