The Unity Caucus: Solidarity When It Suits 'Em

Talking points? With that tone? At your own members? Really?

(Advice to Unity: Don't draft talking points that aims to gaslight and insult your own members. Don't participate in spaces where you cast real teachers in some sort of "The Disgruntleds" light.  That borders on terrible. Save the sharp elbows and the BS for the politicians). 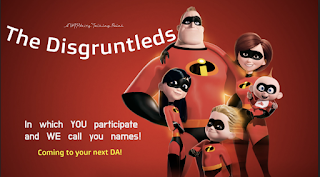 I attended a wonderfully organized (informal) forum last night about how the union (members and leadership) has approached the process of endorsing a mayor.  The forum was hosted by the one unionist that everyone in NYC seems to be developing trust for; Daniel Alicea. He was able to gather members from Solidarity, MORE, New Action, the Retirees and the ruling Unity caucus together. That hasn't really happened before and it's wonderful that it did. The UFT has just experienced a rare no vote on endorsements last Wednesday so Daniel's event was billed not political (and people were invited with the clear indication that we were just interested folks having a discussion about how the UFT chose its endorsed candidate. Most folks had an open and honest discussion and exchanged ideas. This includes many folks from the Unity caucus who were in attendance.

This, however, cannot be said this for every member of the Unity Caucus. I saw some fairly disturbing actions from some of the Unity people ranging from pure gaslighting ("Everyone participated because 14,000 members received an email" or ".. had a chance to leave a comment on the UFT's political website") to out and out sarcasm and rudeness. One Unity member actually had the gall to call the 55% of people who disagreed "The Disgruntleds", while offering a comment that was widely celebrated by the other Unity attendees in the chat.

One forum member, who is not affiliated with any caucus, had to interject to object to the behavior and what he saw as Unity provocations. And, honestly, when contrasted against the idea that anyone who didn't think the process was pure perfection was a "disgruntled" union member (😂😭) his concern was NOT much of a contrast at all.

All in all it was a good performance from the Unity Caucus. But it felt like a performance. And that left some incredibly sad. This is how the Unity caucus acted -toward its own members- during a challenging time. It's just not acceptable.

After the forum ended, texts messages came in from people who were convinced that Unity had come en masse  and with a plan to derail anything that felt like criticism. My initial though to this was that it was just plain crazy. Unity hadn't pulled stunts like this in decades and the idea that they would take this approach to discourse with its own own members now (during a time when it is trying to connect with these same members) seemed like something they would be too smart to try (they are usually very smart folks over there). "Crazy", I thought. "Just crazy. They wouldn't do that".

But then someone in one of the other caucuses was accidentally sent an email that had been sent to hundreds of members of the Unity in the hours leading up to the forum.

The texts were right. Unity had a plan.

The letter and the talking points are below for you to review yourself. This ... is how these folks approach discussion with their other members. I'm so disappointed.