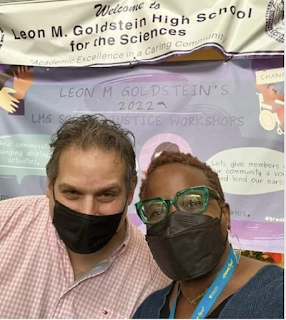 If VP for Academic high schools Janella Hinds and Independent Executive Board member Mike Schirtzer get their way, one of the last vestiges of the teacher wars from the 2000s may finally make it into the crosshairs of the UFT -this month.

Last week, the union agreed to open a full internal debate as to whether or not it will work to end the mass grading sites for NYC high school core content teachers.

These sites, which have been around since 2012, have become notorious centers for the mistreatment of teachers. Two times each year -during the coldest week of the calendar year in January and during the hottest week in late June- high school teachers are rounded up by the thousands and are told to report to one of several locations established by the city as a designated  Regents' Grading Site. Each site houses hundreds of teachers. These sites are often located across the borough in a neighborhood and school we are unfamiliar with.  Once there, we are placed in rooms filled with between 30 and 40 other teachers whom we do not know and are kept in uncomfortable conditions while we are told to score thousands upon thousands of regents exams that have been taken by students who go to schools many of us have never heard of.

While there, we are micromanaged. Our work is tightly supervised. Our scores are often called into question, sometimes in a very public way (generally, being treated like a professional in one of these sites is, by no means, expected).  Many of these school buildings are decades old. In several instances in years past, hundreds of teachers were told to share only two small bathrooms, barked at for being late or for returning late from lunch, or were publicly embarrassed in their grading room for not keeping a "fast enough pace", or for giving a score that made the administrator of the room (or the supervisor in charge of the floor) unhappy. These sites onced employed whole teams of people in different rooms whose only job was to pour through regents exam scores to try to find the one or two teachers who seems to be grading "too low" as a habit and teams more whose job it is to find the teacher who was late or to scour for one or two who may have left early. These are miserable places to work for days at a time, yet thousands of teachers have been asked to do exactly that for the past ten years.

While the grading sites may be terrible, they only affect a very small minority of teachers -only high school teachers and only high school teachers who teach the core content subjects (math, science, social studies and ELA. No gym teachers have ever been asked to go and no art or music teachers either. And only rarely have I seen a special education educator or ELL educator assigned to one of these sites). Because of this, and because the union is a democracy, the issue of being assigned to this terrible working condition has only come up now.

But three weeks ago -a working teacher and activist who is running as an independent candidate for the Executive Board named Mike Schirtzer, teamed up with the VP for Academic  High Schools Janella Hinds and asked the UFT Executive Board to allow the union to debate ending this harmful practice once and for all. Both are running for reelection this year. And both will be forcefully endorsed by me (just as soon as I get around to writing their endorsements!)

After they spoke. the Executive Board, which is the union's second highest legislative body, voted unanimously to ask the UFT's venerable Delegate Assembly to open up the matter for debate and to vote on it.

Officers of the union hardly ever pursue a goal without it first being debated and voted on inside the union's Delegate Assembly (DA). One way an issue can reach the DA is for it to be placed on the agenda through a vote from the higher placed Executive Board. While the body had voted to endorse the process of ending these sites, it had not yet taken the step of actually placing the issue on the DA's agenda.

The next DA takes place on March 23rd. Last week's procedural vote was a small, but important step in ending these terrible working experience which have persisted at Regents Scoring sites for almost a decade now. Barring any strategic related derailing of the meeting by the Unity Caucus-opposing UFC slate, the whole DA will vote on the matter then.

Once raised, the resolution will require only a simple majority vote to pass. If it reaches that threshold, the union officers will then go to the city's Department of Ed and say "whats up. Stop this, please" (and that's how your union works, folks). They will raise the matter, including its history of workplace abuses and senseless waste of money, with them then and will ask the DOE to do what hundreds of other school districts across New York State have been doing for years; follow best practices and score Regents Exams in house, in accordance with the law.

And I'll most assuredly keep you posted on that process.

While there, the DoE might argue that the law requires the city to do this. Let's be clear: It does not.

These centers were created to fulfill a rule that teachers should not score their own students' exams. 693 school districts in New York State responded to this rule by sending teachers to different classrooms to score the tests and by supervising their staff. Only one district -the NYC Department of Education- decided to spend millions upon millions of dollars to create massive grading centers.

(And, just incase you're interested, the DOE spends extra money to on the following things):

That is money that no other district in the state of New York spends. That's what I call a lot a lot of wasted money (and that's a lot of doenuts).
And, while the road has been long, an end to an institutional abuse set up during the Bloomberg Days may, finally, end.
Posted by NYCDOEnuts at 5:39 PM
Email ThisBlogThis!Share to TwitterShare to FacebookShare to Pinterest