In my last post, I wrote about paid employees of the teacher union (up to and exceeding $160,000 per year) who use their paid salary time and their paid salary positions to argue with and confront members of the union. In fact, part of what I wrote went something like this:

[Regular members] who are publicly critical of the union have been accused of being "anti union" or of "having problems" just because they choose to spend their free time criticizing the people who run the union. To be clear, these are sometimes very confrontational exchanges -and they are always being initiated by the paid foot soldiers of the teacher union.

Basically, the long and the short of it is this: If you want to disagree with a critic of the union, that's fine. You're a highly paid professional. We trust in your ability to articulate that without slipping out of your professional responsibilities.  But don't take advantage of the opportunity to slip into verbal attacks.

And, no,  the silly nicknames from the. critics don't help. But you're the professional. You're the one who, we presume, has professional standards to adhere to. Please adhere to them. 🤷‍♂️. Simple right?

Now Norm Scott has spent decades being publicly critical of the leadership of the UFT. It's sort of what he does. Don't misunderstand me. He loves this union. He is the strongest unionist I have ever met. Norm does more without being paid than a great many who are paid. (He also possesses one of the more brilliant minds I have ever come across and is one of the kindest persons I know and everyone who knows him says the same thing).

So it was interesting to see that, after Norm posted about this topic on his blog, another highly paid Unity-Loyalist UFT staff member chomed in to attack him.

The guy who used to write, edit and publish a free newspaper just for UFT members and then hand them out at the monthly city-wide UFT meetings. (The newspaper was called EdNotes. Somewhere along the line Norm moved it to a blog (ergo Ednotesonline).

Read the report. Seemed a little childish. Just tell the story. Keep the snide comments to yourself. You don’t hear anyone coming up with nicknames for Norm Scott after he crossed the picket line in 1968.‬

You were on the picket line in ‘68…until you crossed it.

No need to explain. We already know. 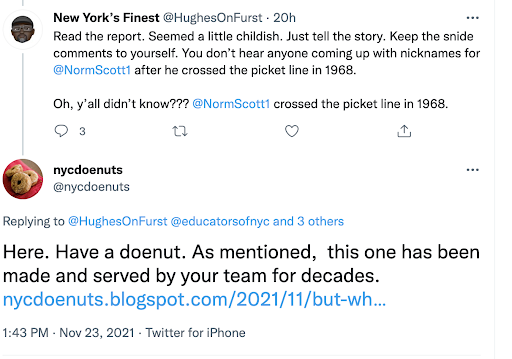 I didn't realize a union rep could be a police officer. I, myself am a NYC teacher. Our nickname, "New York's Smartest", is a bit different from the NYPD "NY's Finest", but that's none of my business and, besides, I digress.

Now I admit, Don Normleone does have a penchant for getting under people's skin. Over the years, he has developed this little knack of his into a bonafide skillset and he has become famous for being a loving critique of the UFT. And those who run the union sometimes like and also sometimes hate the Don. But Norm Scott is as much a part of that union hall has the bricks that were used to build it. And he is loyal to collective action as the day is long.

So when another UFT employee accused Norm -the guy who used to write, edit and publish a free newspaper just for UFT members and hand them out- of being anti-union, I thought it was a joke.

Norm's response, though, didn't quite cut the mustard for me either:

I’d bet anything that I’ve written about 1968 numerous times and argued why even if I was woke in 68 I wouldn’t have crossed a uft picket line if I had any intention of organizing in the union.

He makes a good point. Why cross a picket line and then spend the next 40 years organizing? But even that is a bit too defensive and quite completely misses the point. For me, the only responses that would have been worth noting would be these:

1. Norm Scott never crossed a picket line and anyone who thinks he did must be an idiot either by trade or an idiot by travel (you know, like an otherwise nice smart person simply deciding to visit idiotville for a few hours. We all do that from time to time). The 1968 strike that man participated in paved the way for Mr. Hughes to have a union in the first place and one that could hire him to a rep job in the second place. I think Mr. Hughes should thank Mr. Scott for his service in building the house he lives in.

2. Stop it. Just stop it. While the playbook (of saying anyone who is a critic is anti-union) is old, the essence here is that a union employee, responsible for executing and helping to shape union policies, should not be verbally attacking a person who is critical of those policies. Just stop it, please. I would like to stop thinking about my union for a while.

Going to leave you with Google's definition of verbal abuse and sign off for the holiday.

Verbal abuse is a type of psychological/mental abuse that involves the use of oral language, gestured language, and written language directed to a victim

Posted by NYCDOEnuts at 6:04 AM
Email ThisBlogThis!Share to TwitterShare to FacebookShare to Pinterest