Conventional Wisdom Says the Early Retirement Incentive is Dead. Is It? 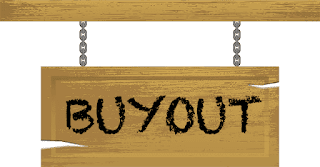 Edit (6/1/2021) Ice Blog published there will no be no ERI. See read here.
Most of the things that are nycdoe-NUTS are related to bad decisions or bad communications. This ERI topic -whether or not the state or the city will offer a buyout for its teachers- has become a pretty big example of a doenut.  I've written a few posts about the possibility of a buyout (Early Retirement Incentive, or ERI) coming from Albany and City Hall (see here here and even here if you're interested) and I have been quietly watching from a distance as the bill (and the process) has unfolded. After being one of the first to (correctly) predict that NYC schools would have to close because of the Virus' first wave, I feel like I have a pretty good read of the tea leaves coming from City Hall and 52 Broadway. Let me just say this: the odds for an ERI are not looking good.

I can also say, with complete confidence, that whole swaths of both outfits are a mess right now. City Hall has become a toxic bag of mistrustful micromanaging. And no matter what the UFT says or does these days, someone (sometimes its own members) frames and depicts them as the bad guys in this saga. That has real-time effects on which policies and possibilities the union is willing and able to pursue. Unfortunately, this includes the ERI.

Back in November, when the union allowed the city to extend part of its retro payment (owed to some of us since 2008, by the way. Only saying), the city agreed, among other things,  to support an early retirement option so as to help avoid the possibility of 2021-2022 layoffs. The bill that they supported was signed in April. That bill (now law) gives the city until May 31, 2021 to decide and actually declare an ERI. If the city doesn't announce it by that date, then there will be no ERI this year -period.

As of this writing, that date is just two days away. And when you consider the city's new fiscal realities, it is easy to understand why we are this close to 5/31 with no deal: The Federal Government has just sent oodles of money to help shore up the budget and the city no longer needs the savings that come with offering a buyout. Because of this, the city simply presented an option that applies only to certain licenses.

Now, on the surface, this may seem fair enough. But the city knows very well that, due to their general composition, this is not an offer that any union can really accept. So the UFT is telling its members and partners that they are trying their best and will fight until the last possible moment, but  that they will not to agree to an ERI for only some people and not others. Again the deadline is in two days.

This is why conventional wisdom is now coming around to the belief that there will no ERI this year (probably). Folks are slowly reaching the conclusion that the deadline will pass and no deal will be reached.

I actually think they may be very connected andso I'll point some out here:

This is a message for principals. so it seems that there is going to be a hiring spree next year (much to the chagrin of folks like me who have been hoping to transition into a new school after a buyout 😔). This is a clear if not quiet win for the union, who stands to receive more union dues from the new hires and it keeps the possibility open for an ERI.

Those who believe the conventional wisdom may look at the actions of the union over the past week and conclude that the ERI is dead and the union is just trying to its best to stay under the radar as it scores other crucial victories for its members. But there is still a chance to win a negotiated ERI with the city! And as long as that is the case, there is also an incentive to stay under the radar until the whole topic of a buyout is resolved. And I believe that the union feels there is still small chance to win it.
There is one more component at play here that is worth mentioning. Believe it or not, history will record that Bill de Blasio has been the most teacher-friendly mayor in UFT history.  And this guy has been literally taking it from every political player in New York State and beyond since the pandemic began. And the man is a Brooklynite. So I wouldn't be the least bit surprised if there was a smile on Bill del Blasio's face this weekend as he makes the union wait until the last possible moment for his decision (I can almost see the smile on this guy's face).
I don't gamble, so I'm not taking or suggesting any bets. But if I were, I would put the odds at 4-1 that there is no deal on ERI. That is to say there won't be one! But I feel like there is an 80% chance that there will be no buyout.
So, with two days to go, I think the odds are 80% no. 20% yes. You  probably get more satisfaction watching the Indianapolis 500 tomorrow than you will checking Twitter about this buyout (I mean, at least if you watch the race, you will know the results).
(Post script; I have decided to leave comments are off for this post. This is only a place for a little updated analysis that you can consider while you wait for the final decision.  While I really deeply appreciate all of the questions about the ERI, the fact is that the details of that plan should be left for a real expert to discuss.  I'm hoping to avoid creating more confusion over this so I'll just leave the comments off for now. Thanks for understanding!)
Posted by NYCDOEnuts at 2:10 PM
Email ThisBlogThis!Share to TwitterShare to FacebookShare to Pinterest
Newer Post Older Post Home